A police report obtained by the South Florida Sun Sentinel states that NBA legend and Hall of Famer Dennis Rodman “open hand smacked” a man at a party at a bar in Delray Beach, Florida last week.

The man, Jeff Soulouque, said he suffered facial injuries in the alleged unprovoked attack, and he wants to press charges, according to the outlet.

“I was like, ‘What is your problem?'” Soulouque told the newspaper on Thursday. “It was out of nowhere. He just hit me and I was blindsided and he started charging me.”

Per the Sun Sentinel, Soulouque, 30, said he had met Rodman previously through a mutual friend. He said he was talking to someone who was standing behind Rodman when the 58-year-old turned around and hit him.

Soulouque said Rodman apologized immediately and invited him to dinner, according to the Sun Sentinel. 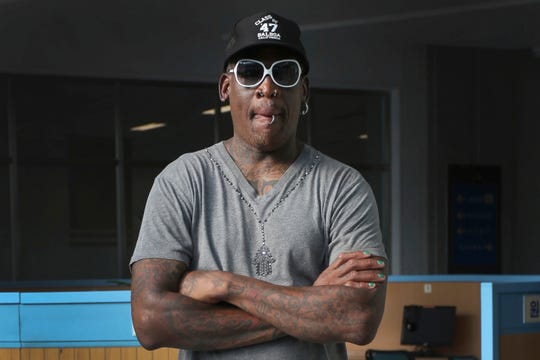 Rodman hasn’t been arrested or charged, and his attorney, Lorne Berkeley, denies that an incident occurred, per the Sun Sentinel. Berkeley also said Rodman was sober and never alone during the party.

Speaking with TMZ on Friday, Rodman said, “I don’t hit anybody in the world. Never in my life, so I’m not worried about that. … My lawyers are taking care of that.”

The manager of the bar said there isn’t video of the alleged incident but said a security guard was shadowing Rodman and there were no reports of any altercations, per the Sun Sentinel.

A witness told police he was about 20 feet away and saw Rodman smack Soulouque twice, according to the outlet.

Rodman, a five-time NBA champion, made headlines earlier this month when a California yoga studio accused him of stealing more than $3,500 in merchandise, including a 400-pound crystal, while entering the business on two separate occasions.