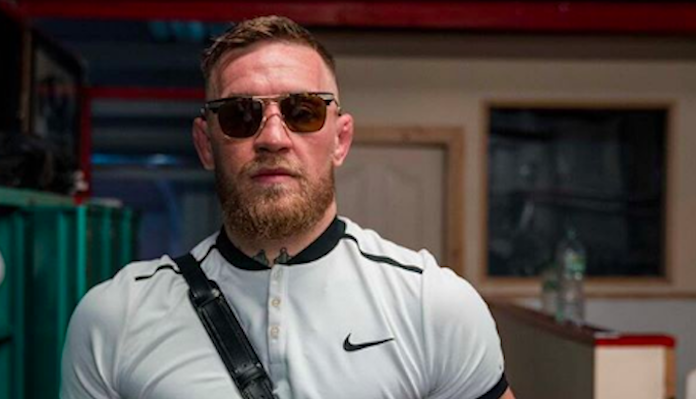 Conor McGregor has accomplished a lot in his MMA career. The Irish MMA star has captured titles in two UFC divisions, headlined multiple record-breaking UFC pay-per-views, delivered some spectacular finishes against top-flight opponents, and engaged in some unforgettable wars. Yet he says there is one moment of his MMA career that stands out as the most significant.

Apparently, he considers his first encounter with UFC championship gold — a UFC 189 interim title victory over Chad Mendes in 2015 — to be the most important win of his career. As he reminds, of course, he did not expect to meet Mendes that night, as he was initially booked to challenge Brazil’s Jose Aldo for the undisputed featherweight strap.

“The most significant moment of my career was when I first tasted UFC gold,” McGregor told Robbins (transcript via MMA Fighting). “It was at UFC 189 in Las Vegas, I was supposed to face the current champion Jose Aldo, but he pulled out nine days before the bout with a broken rib; someone threw a spinning back kick on him and broke his rib. Broke his rib…it was more like a bruised rib.”

After knocking out Chad Mendes at UFC 189, Conor McGregor finally got his long-awaited fight with Jose Aldo, and did not disappoint, knocking the champion out cold in 13 seconds.

From there, he hiked up to the lightweight division to challenge Rafael dos Anjos for a second title, but wound up fighting Nate Diaz instead when dos Anjos sustained an injury.

Conor MCGregor would experience his first UFC defeat in this short notice fight with Diaz, but then avenged the loss in a 2016 Fight of the Year Contender.

After evening his score with Diaz, he finally captured the UFC lightweight title, becoming the first fighter in UFC history to hold two titles concurrently when he knocked out Eddie Alvarez.

After a brief trip to the boxing ring for a blockbuster battle with Floyd Mayweather, McGregor then returned to the Octagon for a fight with Khabib Nurmagomedov. He lost this fight by submission, but recently claimed he was hindered by an injury in the matchup.

What do you consider the biggest moment in the UFC career of Conor McGregor?